Optical-based sensors have a number of advantages over electrical sensors. Fiber optics are insensitive to and do not produce electromagnetic interference (EMI), and they suffer virtually no signal degradation even over very long (100′s of meters) cable lengths. They can be used at higher temperatures than many conventional electrical sensors, and are safe for use with combustible materials and in HERO (Hazards of Electromagnetic Radiation to Ordnance) applications.

The drag force flow (DFF) sensor is essentially a hollow cylindrical pin, whose deflection is sensitively and accurately measured by an assembly of two optical strain gages, which are made up of Fiber Bragg Gratings (FBGs). The FBGs are affixed on the opposite walls of the inner surface of the pin. Information is collected via optical fibers that connect the FBGs with an optical interrogator. The interrogator continuously records the FBG spectra. When the hollow pillar is deflected due to force acting on it, one of the FBGs becomes stretched and the other one compressed, leading to the FBG spectra shift along the wavelength axis in opposite direction. The interrogator (with associated software) determines relative spectra shift which is proportional to the force causing pillar deflection. The ambient temperature variations also lead to the FBG spectra shift. Since both FBGs are exposed to the same temperature change the spectra shift along the wavelength axis in the same direction. Therefore, in addition to the force measurements, the interrogator can also provide information about ambient temperature by measuring averaged spectra shift. The sensor is very sensitive (pin tip deflection as low as one micrometer can be detected). The length, diameter and material of the pin define the measurement range and sensitivity of the measurement. The DFF sensor provides minimal intrusion to the flow, and its measurement sensitivity depends weakly on the amount of flow material that may stick to the sensor surface. The probe does not have any moving parts and/or traps, which makes it non-paralyzable. Due to high measurement rates achievable (up to 500 measurements per second) the sensor can identify non-uniformities of the flow, such as cell conglomerates or granules. 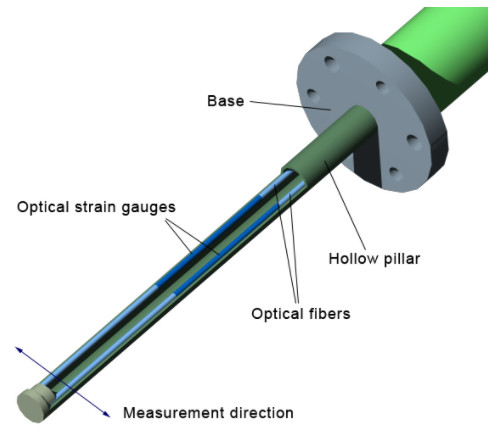